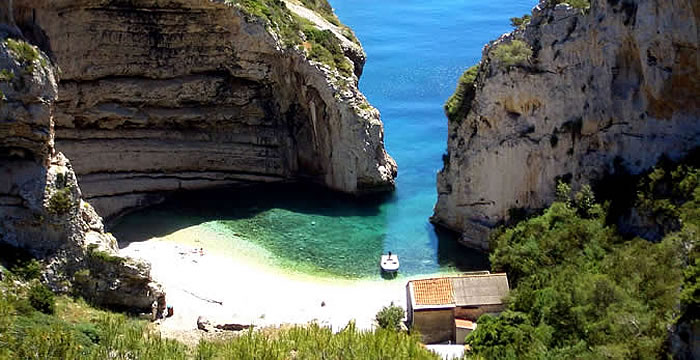 For your convenience, we have selected some of the most known and most beautiful beaches in Croatia.
Beaches in Croatia are in most part (75%) rocky, and the rest are mostly pebbled. Get to know Croatia and the best Croatian beaches in several categories including best family, sandy, romantic, hidden and naturist beaches.

Get to know Croatian national parks and nature parks.
Croatia has eight national parks: four in mountain areas (Risnjak, Paklenica, North Velebit i Plitvice lakes), and four in the coastal area (Kornati, Mljet, Brijuni i Krka). There are many nature parks of national and world importance, for example Velebit and Kopački rit.

Most prominent and visited among eight national parks in Croatia - Plitvice lakes, is the only Croatian natural wonder included in World heritage list (UNESCO) in 1979.

For its incredible landscape beauties, most of Kornati islands were declared a national park in 1980.

With its seven waterfalls Krka is a natural carst phenomenon.

Limski Channel is one of the most beautiful Istrian landscapes with cliffs rising 150 m from the sea.

For many the most beautiful and most wooded island of the Adriatic, is also one of the most attractive and interesting historical and cultural pearls of the Mediteranean.

National park Paklenica is the most important Croatian center for climbers.

Elafiti: They attract many tourists with beautiful landscapes and sandy beaches.

Get to know Croatian history and discover the rich cultural heritage of Croatia.
Historical city of Dubrovnik, Diocletian's Palace in Split and Plitvice lakes are recognized UNESCO world heritage sites. More then anywhere in southeast Europe, developed cities in Croatia have antique, roman or middle ages roots. Discover Pula and Split with it's many antique monuments, romanesque buildings in Trogir and Zadar, Gothic Sibenik, Pag, Hvar, Korcula and Dubrovnik or Varazdin with many baroque streets and buildings.

Split: city with a heart in Diocletians Palace and a soul that welcomes you with open arms

Dubrovnik: Medieval town on the Croatian Adriatic coast and a cultural treasure full of historical monuments

Euphrasian Basilica is the most valuable cultural monument in Porec.

Numerous churches and monuments of culture are preserved from all historical periods.

Old town is dominated by four church bell towers which became the symbol of the town and island.

Opatija, an elegant tourist destination, is the center of the Riviera with the longest tradition of tourism in Croatia.

In the center of Šibenik lies St. Jacobs (St. James) cathedral, the most valuable object in Šibeniks architectural heritage, which was added to UNESCO list of world heritage sights in 2001.

Hvar is a city from a fairy tale - its architecture, beautiful nature and mild climate

Rovinj: one of the most pitoresque Istrian coastal town.

Fun, Concerts, Party, Music, Night life.
Croatian cities and summer resorts are becoming well known in Europe for their night life and good entertainment. At night streets and cities, cafes and nightclubs are full of young people enjoying themselves.

Famous singers and band hold, every year, concerts in Arena in Pula.

Begin the night in Boa club, and continue in disco club Piratas

Numerous cafes and clubs on the beaches offer fun until dawn.

Hemingway often hosts many of the most popular Croatian and international DJs.

Zrće beach: is one of the biggest summer party zones in Europe.

For everyone searhing good fun we recommend: The Garden and Gotham

Hacienda: one of the best clubs in Croatia.

Kocka, Master's, Tribu and Metropolis: some of the clubs full of entertainment.

Summer terraces of almost every hotel and restaurant offer a broad entertainment.

Croatian national and traditional gastronomy, traditional food and drinks.
The Croatian cuisine is specific for every region. Croatia offers own most popular domestic dishes and specialties: of the cold plates these are for example the famous dalmatian or Istrian prosciutto, cheese from Pag or Lika, sheep cheese, kulen from Slavonia, cesnjovke from Samobor or Zagori and fresh cheese with cream. For those who wish to experience the cuisine of Croatia, we have prepared a list of some of the best Croatian restaurants.

"Valsabbion", "Vela Nera", "Milan" ... will give you a unique gastronomical experience

Top recipes of the Chef will surely make you return to the restaurant Barilla.

Restaurant Pineta will mesmerize you with Istrian indigenous foods and wine.

"Yaška": Exclusive restaurant in the heart of Hvar

"Restaurant LOPOČ": can be found in small town of Momići on Neretva. In this lively corner You can experience traditional family gastronomic offer!

Active vacation, sport and recreation in Croatia.
For those who prefer a more active holiday, there are numerous possiblities for sports and recreational activities in Croatia. You can choose between cycling, horseback riding, rafting, canoeing and kayaking, diving, water skiing, surfing, tennis, beach volleyball, and many more.

Paklenica is the most important Croatian climbing centre, and is considered one of the top European cclimbing centers.

You do not need to try any of the 165 tennis courts, you can try various water sports, equipment is available in any tourist village...

For fans of windsurfing we recommend: Premantura

Experience connection to nature in Nin and relax while enjoying horseback riding.

The natural beauty of the undersea makes Bol one of the favorite places for diving.

Punat is among the top places for windurfing in Croatia.

Bicycling can be an exciting way to get to know the mountain slopes, meadows on Mljet

Sailing in the Adriatic: a unique experience