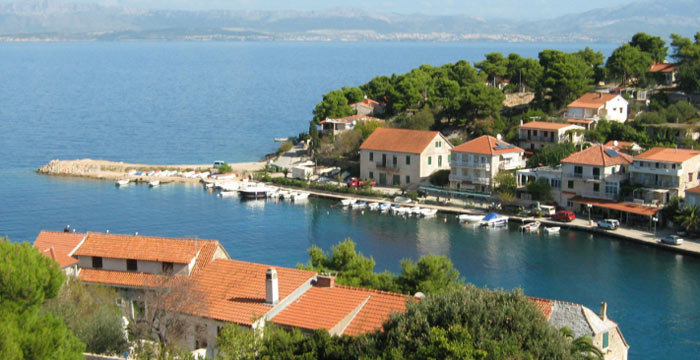 Solta is an island in central Dalmatia (Southern Croatia), near Split, west of Brac, area 51.9 km2, which administratively belongs to the Split-Dalmatia County. The highest peak on the island of Vela Guard is located at an altitude of 237 m, in the Upper Village. With the island of Solta, Maslinica at bay, there are seven islands. The main town on the island is Grohote.

1. The grave with the inscription FOR TRAVELERS - It is a monument to unknown passengers who died on the island of Solta. Attractions on the island of Solta: Ala Moana, mirin, remains of ancient walls in the Lower Village, Chapel of the wall in Grohote chapel in the basilica Grohote, an ancient tomb in the parish church in Grohote, the remains of an early Christian basilica in Stipansku, Marchi family castle from 1706. Olive trees in the memorial house of his works in Nečujam, a monument for victims of World War II...

Tourism on the island Solta

For centuries, Šoltanska Field Upper Field, Middle Field and Lower Field, provides food for generations of residents Soltani. Upper field is located to the north of the Upper Village. The interior of the western part of the island is approximately 6 km long and 2 km wide karst field, Middle field and lower field making unit of a large array of Grohote of the Lower Village. In the middle of the field church. Michael from XIV. / XV. In the church are preserved Gothic frescoes from the fourteenth. century depicting Deisis in the apse and St. Michael's triumphal arch. The church has been restored and received a well-deserved mark heritage.

Culture and History of Solta

I's important to emphasize the richness of flora and fauna, especially (over 100 species of birds, wild pigs, rabbits, etc.). The island has been inhabited since prehistoric times, and it was first mentioned in the 4th Pseudoscylax ct. Kr. named Olyntha. Later named Osolenta. After the Croats in the name croatisize in Sulet form. The island bears its name to the modern era, when under the influence of the Venetian government comes to romanization of Croatian name in the form of Solta. However, the most important role for the expansion of Solta has shaped the Austro-Hungarian Empire, which was mapped in the 19 century, using Italian toponyms.

Hartă
We have placed cookies on your computer to help make this website better. You can change your cookie settings.Otherwise, we will assume you are OK to continue.
OK / Sunt de acord, nu mai afișa acest mesaj.