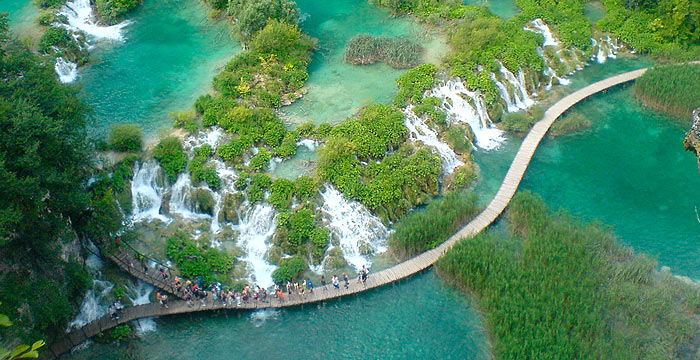 The Plitvice National Park, the most widely renowned of Croatia ’s national parks, is entered in the UNESCO Register of World Natural Heritage. Sixteen lakes interconnected by waterfalls created through the deposition of travertine, a light-coloured calcareous rock, constitute the chief attraction of this unique park.

1. Hotel Jezero Plitvice - Hotel Jezero is situated in the very heart of the Plitvice Lakes National Park, only 300m from the largest lake, Kozjak. The hotel Jezero offers 229 units, including 7 suites, 7 semi-suites and 5 handicapped equipped rooms. There is also the possibility of adjoining family rooms in several accommodation units. All rooms are equipped with satellite TV, telephone and Internet connection and washrooms with either a bath or shower. The majority of rooms are equipped with a mini-bar.

2. Hotel Bellevue Plitvice - Hotel Bellevue is situated next to hotel Plitvice. It has a total capacity of 70 rooms, of which 48 are double, 16 triple and 6 single rooms. Breakfast is served in the hotel and all other meals in the restaurant of the nearby hotel Plitvice or any other restaurant in the National Park. All rooms have a bathroom and a direct telephone line. There is a large sitting area with a TV and an outdoor terrace available in the summer time. The hotel is especially convenient for groups.

Tourism and places in Plitvice

The wellspring of the River Korana issues from an area within the park, surrounded by dense forests of beech, fir and spruce, partly in the form of primeval virgin forest. Apart from the lakes and forests the park also contains several caves, springs and flowering meadows, and is inhabited by many rare but (here)still preserved species, one of these being the brown bear.

It is a moot point as to when the park is at its most beautiful. Is it in spring, when the meadows are covered with flowers, in the autumn, with its numerous seasonal hues mirrored in the lakes, or perhaps in winter, when the waterfalls and surrounding trees are hushed and shrouded in ice in the snowbound landscape? The popularity of this park is augmented by the forms of transport used for conveying visitors around its various parts (panoramic trains and electric-powered boats), as well as the convenient geografical position.

Nous offrons un total de 5 aménagements.
Plan
We have placed cookies on your computer to help make this website better. You can change your cookie settings.Otherwise, we will assume you are OK to continue.
OK / Je suis d'accord, ne montrent pas ce message.